At let's year, presented a large number of new products in the field of consumer technology and electronics. And one of the attractive categories was gaming monitors, the best news among which we want to draw your attention.
This year can definitely be considered successful for gamers, especially if you pay attention to the number of announcements of all kinds of new products that we saw at CES 2019. Naturally, keeping track of everything at once is quite difficult, and therefore we decided to break down all the loudest presentations into logical and convenient categories. And in one of the previous articles we have already managed to consider the most interesting novelties of laptops, and today we bring to your attention the most exciting gaming monitors that gamers will surely enjoy.
Of course, the coming year will bring many more innovations in this and other categories of technology and electronics. However, what was presented at the exhibition is quite enough to arouse interest among the general public. As, for example, the very first gaming monitor from the fairly well-known in the gaming industry Razer or three great new ASUS ROG Strix. What about the first of its kind 65-inch gaming monitor? All this and much more awaits you in our selection today, and if you have already become interested, you will definitely appreciate some of the proposals.
1
Razer Raptor 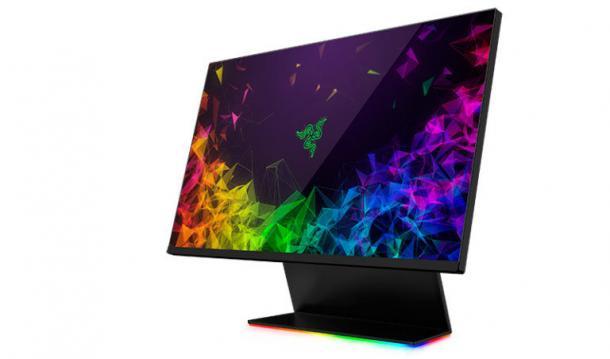 And without further ado, let's begin our acquaintance with, perhaps, the model most interesting to many gamers, namely the Razer Raptor monitor. Yes, it is under that name that the first game monitor of the company will appear on the market, which this year presented a sufficient number of new products in various categories at CES 2019. From the point of view of technical characteristics, the company decided to choose the most familiar and optimal parameters: a colourful IPS display with a diagonal of 27 inches and a resolution of 2560 × 1440 pixels. The refresh rate, in this case, is 144 Hz. Compared to the unwritten, more familiar standard of monitors with a resolution of 1080p and a frequency of 60 Hz, this looks much more interesting.
The monitor supports FreeSync and can even broadcast what is happening on the Razer Phone 2screen via USB Type-C, but its most outstanding feature still remains an exceptional design. At the bottom of the stand, the monitor received RGB-backlighting, which is an indispensable attribute of every gaming device, the cables on the rear panel stylized in the neon green characteristic of the brand and a stable, but quite interesting stand. On sale, this model will appear, of course, later this year, and the price will be about 50,000 rubles.
2
Lenovo Y44w 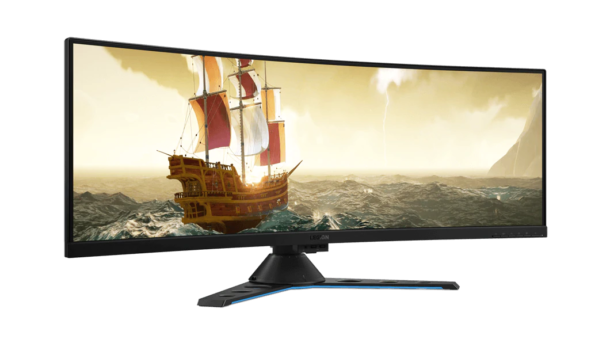 However, this year, Razer was far from the only ones who decided to release their first monitor. And Lenovo in this regard managed to excel even more since the presented Lenovo Y44w gaming monitor got at its disposal an ultra-wide curved 43-inch screen. She, in turn, received not the most usual aspect ratio of 32:10, which is slightly more than that of the rather popular Samsung CHG90 monitor (32: 9). The latter, however, is also distinguished by a larger diagonal, but this is not about that. The resolution, in this case, is 3840 × 1200 pixels, which conditionally is half of 4K. Of course, it has a refresh rate of 144 Hz, and there is also support for FreeSync 2. It is logical that functions such as picture in picture are supported for the most optimal use of such a wide space. This new product will debut in April at a preliminary price of 80,000 rubles.
3
MSI Optix MPG341CQR 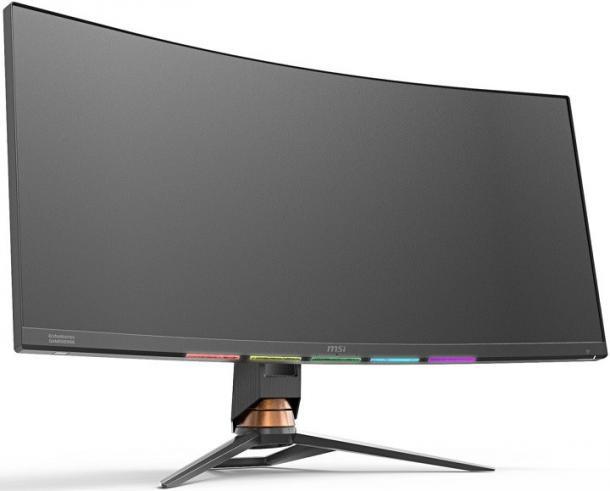 The 34-inch MSI Optix MPG341CQR has become a slightly less wide gaming monitor that deserves attention no less than others. Its curved screen received a resolution of 3440x1440 pixels, but the refresh rate is 144 Hz, which is usual for a gaming monitor. Among other things, this new product has a number of very interesting functions, such as the built-in camera and microphone, which can be used with a voice assistant. In theory, the latter will give you the opportunity to change various monitor settings, such as brightness or modes, with the help of whether it is realized outside the Western market. There is also a holder for an external camera, which streamers will definitely like. Of course, like a true gaming monitor, there is also an RGB backlight, which, fortunately, can be made less bright or completely turned off if you like simplicity. The debut of new items on the world market will take place this summer, and the price will be about 65 000 rubles.
4
Lenovo Y27gq 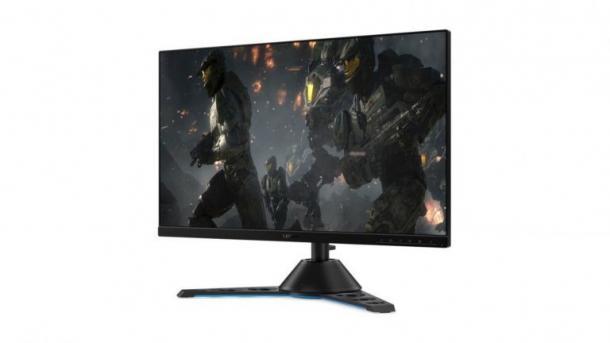 In case you do not need a wide or huge monitor, Lenovo will also be able to provide you with an interesting solution, as the company decided not to limit itself to releasing the only first gaming monitor. A more compact and no less interesting model was Lenovo Y27gq. This monitor got the usual diagonal of 27 inches with a resolution of 1440p, although more interesting for gamers will be that it is updated at a frequency of 240 Hz and supports G-Sync. It is clear that this implies greater responsiveness and smoothness of the picture without compromising resolution and quality. This combination of resolution and refresh rate is observed for the first time among a huge number of offers on the market, which will allow this new product to be an excellent option for those who are looking for a single monitor that can provide a high-quality picture not only in the middle of the game process but also in the process of performing creative tasks. As for the cost, it will be about 70,000 rubles at the start of sales in April.
5
Alienware OLED 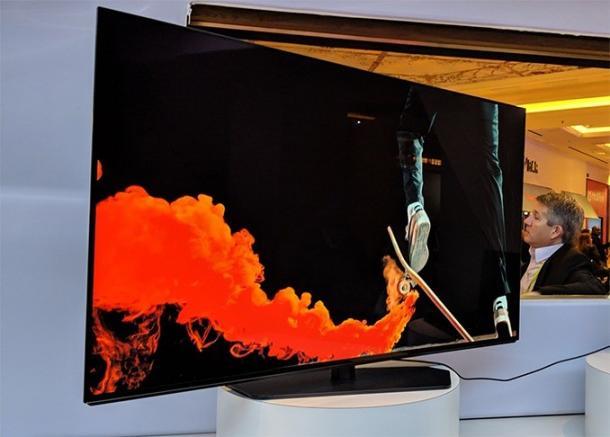 The Alienware OLED presented at the exhibition was the first 55-inch OLED monitor of the company, which has four resolutions and a refresh rate of 120 Hz. In this regard, it resembles the recently announced LG OLED TV of 2019, although the picture itself looks much smoother than at standard 60 Hz, like most displays with this resolution. Of course, using such a monitor, you may need one (if not several) of the best current video cards in order to reveal its full potential. The fact that this monitor will support HDR was not surprising, even though at the moment it is not yet known which one. Other technical parameters, as well as cost, are still a mystery, but by the second half of this year, they are likely to be announced on the monitor release.
6
Samsung CRG9

We have already mentioned the Samsung CHG90 as well as its amazing 32: 9 aspect ratio. And despite the fact that the resolution of 3840 × 1080 pixels a little disappointed the audience, the new Samsung CRG9 appeared on the scene designed to solve this problem. The 49-inch curved monitor received exactly the same aspect ratio, but its resolution is already much more interesting and amounts to 5120x1440. The refresh rate, in this case, is 120 Hz, but there is also support for AMD FreeSync 2 image synchronization technology. For good contrast and accurate colour reproduction, HDR meets the HDR10 standard. As is the case with some other new products, this model has not received an exact release date or price, at least approximate. However, you should not expect that such a product will cost less than 70,000 rubles.
7
HP Omen X Emperium 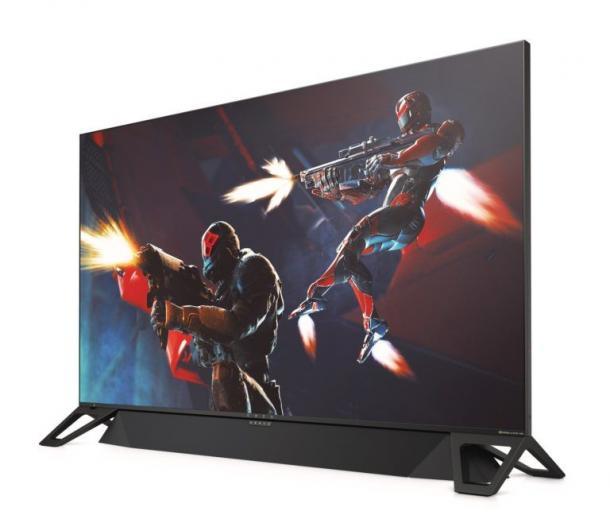 Another "big guy" among the gaming monitors presented at CES 2019 was the HP Omen X Emperium, which received a 65-inch display with 4K resolution. He also noted full support for G-Sync HDR. An additional advantage of this new product is the integrated Nvidia Shield., which allows users to access Android applications and the Google Assistant intelligent assistant, and some versions will even be equipped with a built-in soundbar. Such a combination will give you the opportunity to get almost everything you need for the audio-visual output of the gameplay in one purchase. Nevertheless, you run the risk of spending a serious amount of money aiming at a gaming monitor with a large screen, since this new product will appear in February and will cost about 330,000 rubles. The amount is really serious, but a real rare gamer will save on high-quality equipment, of which this monitor is definitely.
8
Monitors ASUS ROG Strix

ASUS also excelled at the exhibition by announcing immediately three monitors of the ASUS ROG Strix series (XG438Q, XG49VQ and XG32VQ) The triplets received wonderful TFT VA matrices with excellent contrast and supported FreeSync 2 and DisplayHDR standards. As you can see from the name of the models, we have three monitors with different diagonals and slightly different characteristics. For example, the youngest and oldest versions, at 32 and 49 inches, respectively, received curved displays and a refresh rate of 144 Hz. For the 32-inch version, the resolution is 1440p, while for the 49-inch version it is indicated as DFHD (3840 × 1080 pixels). The latter, as we mentioned above, is not the most impressive, so Samsung's new version will be its best alternative.
The average model - XG438Q, received respectively a 43-inch with a refresh rate of 120 Hz and 4K resolution. It is also distinguished from the "brothers" by a flat-screen. This model will also be released a little later, in the spring, while the other two are already in late January. Well, in addition to the brand and some elements of appearance, all three models are also united by the fact that their prices are still unknown.
9
ViewSonic Elite Monitors 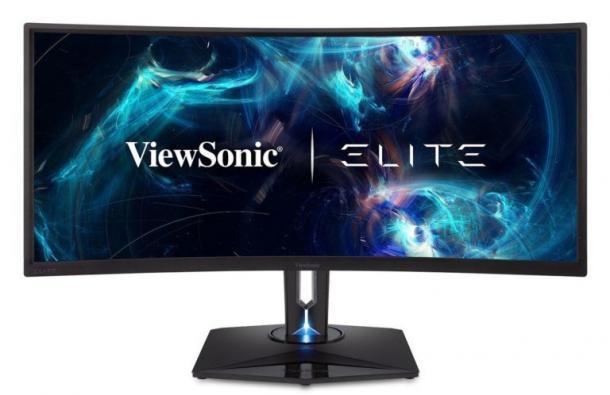 In addition to introducing a pair of new gaming monitors at the show, ViewSonic also announced its new gaming subsidiary, Elite, with them. Products under the name Elite have a more "gaming" design than previous offers of the company and also support RGB synchronization with Thermaltake, Razer Chroma and Cooler Master devices. The first monitor, which is the ViewSonic Elite XG240R, is conceived as a 24-inch high-quality budgetary with a resolution of 1080p and TN matrix. It will also delight users with FreeSync support and a refresh rate of 144 Hz. The average cost of this monitor is at just below 20,000 rubles.
And at the opposite end of the price range is the company's second new product - ViewSonic Elite XG350R-C. He got at his disposal a wide 35-inch curved display, whose resolution is 3440 × 1440 pixels. It also offers support for the relatively demanding HDR10 standard, which makes it a good option for fans of HDR gaming or video. The refresh rate, in this case, is 100 Hz, which is a typical model of this size and resolution. The novelty will be available at the end of this month at an average cost of 55,000 rubles.
Ads go here
Share
byGodOfModPosted at7:22 AM Post a Comment